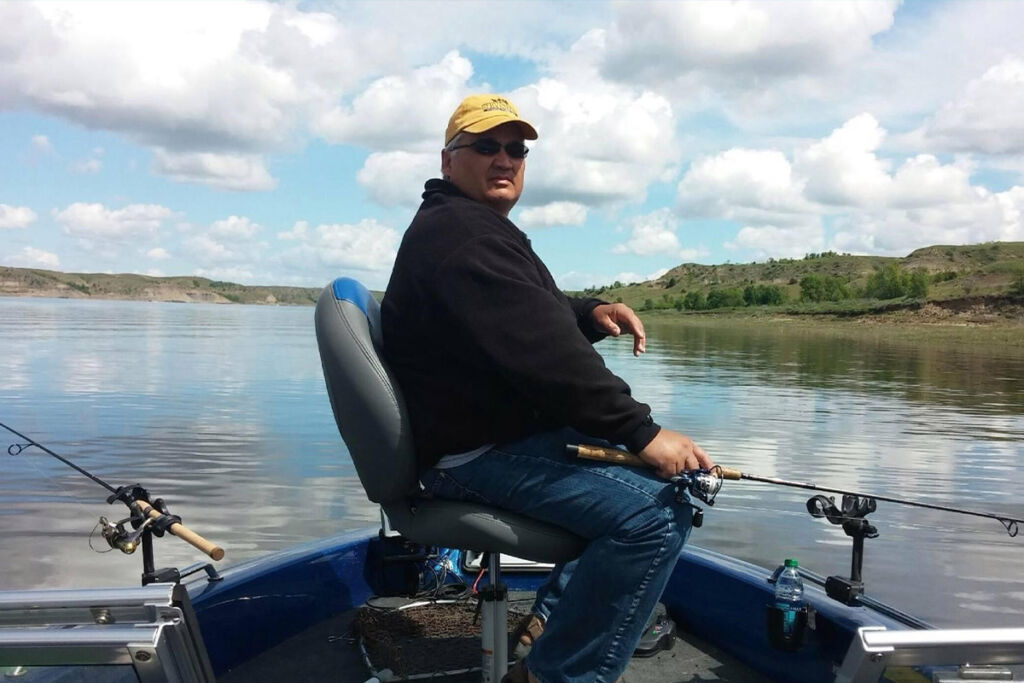 Wayne was 54 years old with a previous history of mantle cell lymphoma that he had a stem cell transplant and chemotherapy to treat. He was cancer-free from his stem cell transplant in June of 2011 until he got the news of recurrence in 2019. He underwent another bout of chemotherapy and was on a transfusion once every other month, called Rituxan, to keep the lymphoma at bay. He was still cancer-free in June of 2021, when he passed.

Wayne received both Pfizer vaccinations in February and March of 2021. He was never tested for antibodies.

In May of 2021, Wayne was exposed to COVID-19 during a routine golf round. He wasn’t concerned as he knew he was vaccinated. He started to feel symptoms a few days later, on May 7. He was tested on May 14 (on his second or third trip to the doctor) and was found to be positive.

His wife, Rita, and daughter, Harlee, were both also tested and returned positive. Both Rita and Harlee had very few, if any, symptoms. Wayne, on the other hand, was seeming to get worse and worse. His oxygen levels would drop significantly, so he went to the emergency room for treatment a couple of different times. Receiving an inhaler and sent home, Wayne would feel better for a few hours then go back downhill.

On the morning of May 21, Wayne’s oxygen was dangerously low, and Rita called the McKenzie County ambulance. The crew came to get him, brought him into the hospital, and realized they needed to get him to a larger facility. Due to the weather, a Bismarck flight could not land in Watford City that day, so Wayne was ambulanced to Williston and air flighted out of there to Bismarck that afternoon.

Wayne spent the last couple of weeks of his life in the Bismarck Sanford hospital. He received breathing treatments, x-rays, and CT scans. They determined he had massive lung damage from the COVID and started giving him the convalescent plasma to help his body fight it off. After the first round of plasma, they did an antibody screen and found out that his body was not accepting the antibodies. After further review, it was determined that the Rituxan, the medicine he was taking to save his life from lymphoma, was fighting off the antibodies instead of allowing them to take hold and fight the virus.

Each day while in the hospital, Wayne would be in good spirits, and each night he struggled to breathe and had “episodes.” On the evening of June 1, Wayne was intubated. It was thought that his body needed to rest in order to fight the virus. While intubated, Wayne’s numbers and scans stayed mostly stagnant with only slight improvement here and there.

On the morning of June 9, Sanford called Rita to inform her that Wayne was unable to keep his oxygen at a proper level and that even at the highest oxygen level and highest pressure setting on the vent, it was still dropping. They advised her that she needed to make the trip down to Bismarck to say goodbye.

Many family members were allowed to gown up in protective gear and go in and see him and say goodbye, and a handful of us were there holding his hands as he left this world.

The entire thing still feels like a nightmare we are hoping to awake from. But the reality of the situation is, this is a deadly virus. It took the cornerstone of our family.

Get vaccinated, wear masks, protect YOURSELF but also protect OTHERS. It really is life or death.